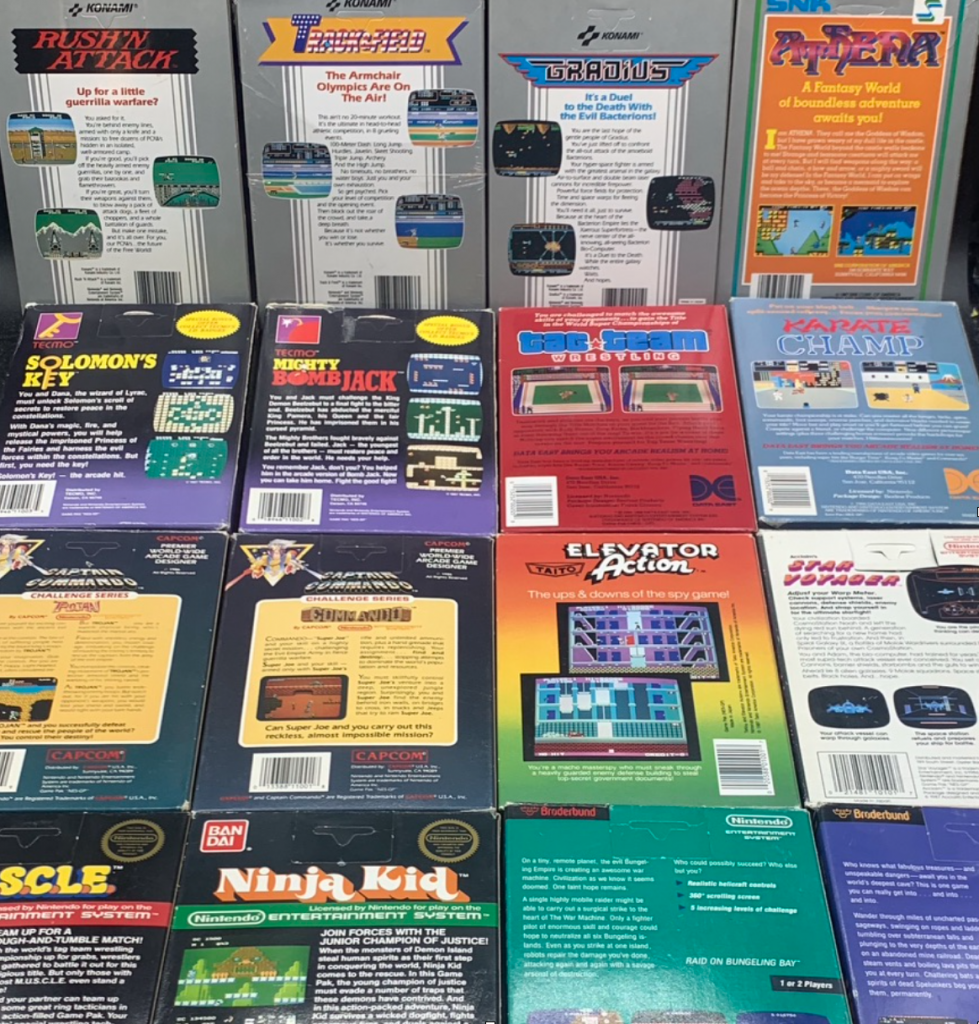 While I would love to jump right into these 3rd Party games, it’s important to understand where Nintendo started with their games and packaging in the beginning.  This will help paint a clear road map for variations, the packaging and the reasons why certain boxes exist, while others do not.

The Nintendo Entertainment System (NES) had a soft launch in October of 1985.  It wasn’t until early 1986 that the Japanese gaming company started to become a household name throughout the United States.  Nintendo initially published 17 games at the launch, with an additional 9 games a couple months later in early 1986 – all first party titles [1].

Excitebike, Kung Fu, Duck Hunt, Pinball, Ice Climber and Super Mario Bros were among the games sold when the system was first released in 1985. A couple months later, in mid-1986 Nintendo releases the next nine games which includes titles like Donkey Kong, Urban Champion, Mach Rider, Mario Arcade and Popeye.  These first games, published exclusively by Nintendo are considered 1st party games.  While not all were developed by Nintendo, they were specific in publishing, and all carry the same “Black Box” style* that is, to this day, synonymous with the Nintendo Entertainment System brand.

It isn’t until October and November of 1986 that the NES has its first introduction to 3rd Party published games.  Bandai, Data East and Capcom are among the early 3rd party publishers to release games stateside for the NES.  Bandai is supposedly first, but we do not have great data to point to specific dates of releases, but simply only months and years from old Game Pak Directories that were offered complimentary by Nintendo Power.  While these are good guides, some dates have been found to be inaccurate – for instance Mach Rider is listed in the guides as an October 1985 release (launch), but we know it was released in 1986.  They also list Soccer in some of the guides as being released in 1987, but we know that it is a launch title and was   available October 1985.

Bandai released three games in 1986 – Chubby Cherub, M.U.S.C.L.E., and Ninja Kid.  Capcom released 1942, Commando and Ghosts ‘n Goblins.  Lastly, Data East released two titles Tag Team Wrestling and Karate Champ.  In 1987 Acclaim, Broderbund, IREM, Konami, SNK, Sunsoft, Taito and Tecmo all published games for the NES.  All of the games that Nintendo (1st party) and these publishers (3rd party) released from October of 1985 until Early September of 1987 have what collectors call a “hangtab” built into the back of the box.

*While I have no specific date or origin of the term Black box, I do know that when I started collecting games I turned to the internet. It is here that I started reading video game forums and old Usenet newsgroups circa 1999.  People referred to these games as black boxes back then, and the term has followed us through the years.

What is a hangtab and why is it important? 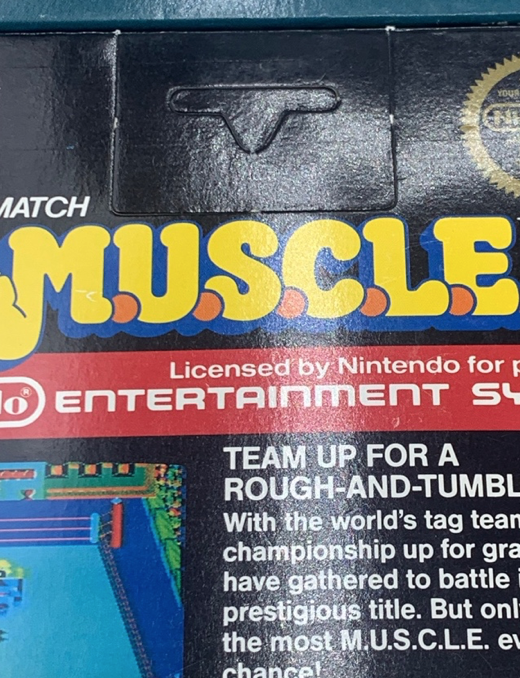 The term “hangtab” gets thrown around often when you collect complete in box Nintendo NES games.  It is a term coined by video game collectors, that calls attention to the specific die-cut box that has a built-in hanger.  While the journey down the road of proper nomenclature is fascinating, we will not do that today – however; it is important to note that the term “hangtab” is a collector term and not the proper name for the box in question.  The box in questions would be a Reverse Straight Tuck (RST) locking bottom with built in hanger.  Meaning that the box has a locking bottom mechanism, so the contents do not fall out and that the flap of the box, opens from the backside of the box. Furthermore, nearly every NES game box is an RST with a locking bottom. For the sake of consistency, we will keep this identifier as “hangtab” as a nod to the pioneers of game collecting and everyone since who has identified these boxes as such, myself included.

The importance of this box type should not go unnoticed, as it helps us as video game collectors and hobbyists to understand what was earlier vs. later in production.  A hangtab box is, for lack of better words, is the bees knees.  It is early NES at its finest – le crème de la crème. Hard to find, condition sensitive and in most cases extremely rare. To find high grade condition hangtabs complete in box is very difficult.  To find brand new and factory sealed hangtabs is next to impossible.  Locating mediocre condition complete in box hangtabs can be done, but even those are starting to creep up in price.  It’s important to note that these boxes were often discarded, destroyed or severely damaged. 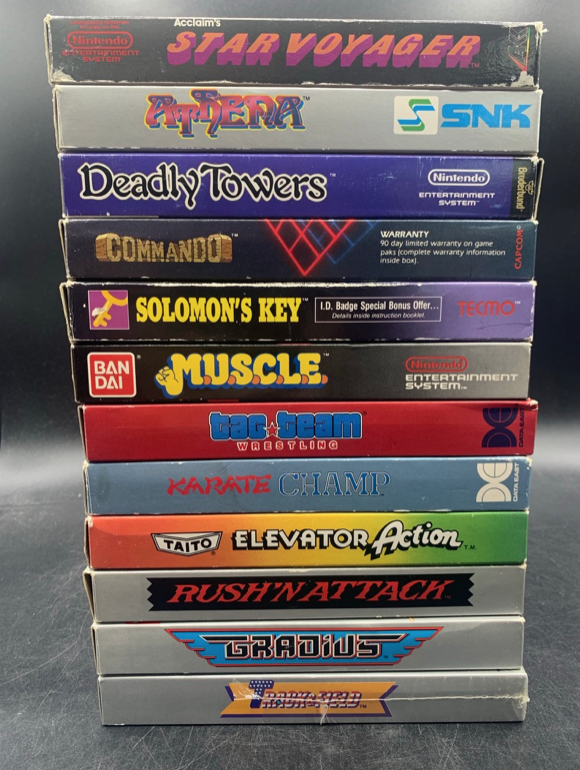 With the advent of the Wata black box article released a few years ago, we have seen the rise in popularity of collecting black box games, and more notably, the sticker seal and hangtab variants of these games – we have only seen a little blip on the radar of collecting 3rd party hangtabs.  The hardest of hardcore NES collectors know what’s up and the majority have done the set and then some.  Some of the most important video games ever made were first available with a hangtab box – we have the likes of Castlevania, Rygar, Ghosts ‘n Goblins, Track & Field, Solomon’s Key, Raid on Bungling Bay, Spy Hunter, Burgertime… the lists goes on.

NES 3rd party hangtab variants are rare. Fact.  When speaking to condition rarity as well as overall rarity – most of these titles have less than 10 known in factory sealed condition.  While production numbers are unknown on games, especially with specific print runs and variant changes, we do know is that many of these variants were released and on store shelves for less than a year. That year being 1987 – the year Nintendo turned into a household name.  Games weren’t sitting on store shelves, unsold – they were moving.  Consumers wanted more games. Case packs from this era do not exist, or if they do, they are an extreme anomaly. The video rental market was not in full effect in 1987. The masses were only beginning to arrive to Nintendo. Any way – I should probably wrap it up and provide the list of games to hunt down. Fortunately for you folks, 3rd party hangtab games have their share of variants.  I will do my best to break down the variants by publisher and  change and possibly why it changed.

Need more information or just want to say hi? Use the button below to fulfill all your dreams….😁 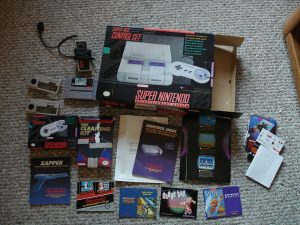 Getting Started With Video Game Collecting 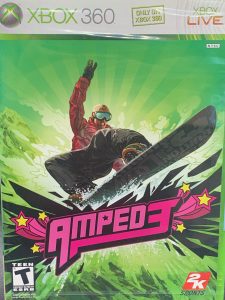 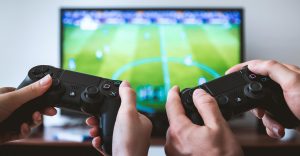